The Many Uses And Benefits of Cinnamon Oil

The scent of cinnamon is enough to make most people’s mouths water and fill them with warm and cozy memories. The bark of Cinnamon trees produces one of the world’s most recognizable scents and flavors. It’s a common ingredient in many different types of recipes from aromatic tea to delicious baked cinnamon rolls. Most people are probably used to cinnamon in the form of brown rolls of bark called quills, or as a powdery substance that is used as a popular additive in food and drinks. Cinnamon quills are also commonly used as decorative elements around the home and especially in kitchens and bathrooms to diffuse odors. The bark and leaves of the cinnamon tree can also be broken down into an essential oil which has a plethora of uses in and out of the kitchen. Cinnamon is more than just a warm aroma and sweet taste; it also has many nutritional and medicinal benefits.

Cinnamon oil can be distilled from either the bark or the leaf of the cinnamon tree and there are differences between the two oils. Both oils can be caustic to people if not diffused in water. Cinnamon leaf oil, however, is considered to be safer, as well as cheaper, than the oil extracted from the bark of the tree. The oil from the bark can irritate the skin more than the oil from the leaf. Additionally, each of the oils has its own smell, which is something to consider when using the either cinnamon oil in aromatherapy. Some people think the oil that comes from the leaves of the tree smells more like cloves, while the bark is said to have a spicy smell. For health purposes, though, it seems that the cinnamon oil from the leaf and the bark can be used interchangeably. 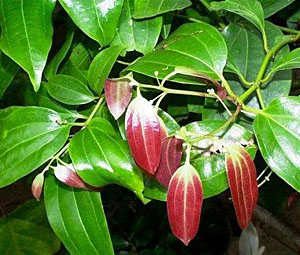 Cinnamon as an Essential Oil

The leaves and bark of the cinnamon tree can be used to create an essential oil known as cinnamon oil. Oil of Cinnamon can be extracted through the process of distillation, where pressurized steam causes the oil to be released as a vapor that is collected in a cooled pipe, causing it to condense back into a liquid. It can also be collected through the process of pressing where the cinnamon oil is literally pressed out of the plant. This is not a good method for collecting cinnamon oil, however, as the shelf life of this type of oil is rather limited. It is possible to extract cinnamon oil in the comfort of your own home, but the oil is also easy to find and affordable to buy. Cinnamon oil is an oily amber colored substance which has many uses.

While cinnamon is mostly known as a tool in the kitchen, it has many benefits beyond the culinary world. Cinnamon oil has many health benefits and is commonly used as a homeopathic remedy. Cinnamon oil can be used, with doctor’s supervision, to help fight internal infections. When diluted with water, Cinnamon oil also works as a wonderful mouth wash; not only does it have antiseptic properties, but it also leaves your breath with a lovely scent.

Oil of Cinnamon has also been shown to help those suffering from arthritis. Cinnamon oil can be added to a warm bath to help ease inflammation, or it can be diluted in water or a cream base and applied topically to inflamed joints. Its warming properties have been proven to help ease the pain of inflammation. As only a few drops of the oil are needed, cinnamon oil can be a comparatively cheap way to treat symptoms of inflammatory diseases.

Because Cinnamon oil is also an anti-fungal agent (as well as oil of Oregano and Tea tree oil), it can be used to help prevent or fight yeast infections and fungal diseases of the mouth, like thrush. By simply increasing ones intake of cinnamon oil in one’s diet, it is possible to help the body naturally fight off these unpleasant fungal infections. When used in a vaporizer, cinnamon oil has proven to help respiratory complaints, especially those caused by bacterial infections or the common cold.

People suffering from type two diabetes may also see some health benefits to including cinnamon oil in their diet. The oil helps regulate blood sugar, even when added to high carb foods. It can also help fight insulin resistance by helping the body process glucose better.

The Nutrition value of Cinnamon Oil

Cinnamon oil is more than just a great aroma; there are many nutritional aspects which make it a great addition to any healthy diet. Cinnamon oil is rich in antioxidants which help battle free radicals in the body that cause cancer. Antioxidants also aid the body in healing and promote a more youthful appearance. Because Cinnamon oil acts as a metabolism booster, it can be added to food as a yummy tool to aid weight loss.

Oil of Cinnamon is an excellent source of fiber, iron and calcium. It is also a great way to increase your magnesium levels. Due to its unique combination of fiber and calcium, cinnamon oil helps break down and remove bile salts from the body which lowers the risk of colon cancer. The fiber found in cinnamon oil is also a natural way to help those who suffer from constipation or diarrhea. It has also been shown to lower flatulence levels and calm indigestion. The nutrients found in cinnamon oil also help lower cholesterol and fight off heart disease.

The scent of cinnamon can do more than bring about calming feelings as well as warm and fuzzy childhood memories; it’s also great for the brain. Aromatherapy shows that the scent of cinnamon helps people to concentrate and boosts memory. It has also been found to boost visual motor speed. Cinnamon oil can also be used to help elevate mood and relieve stress. It’s easy to add a drop of cinnamon oil to one’s favorite candle or potpourri mix to get the wonderful aromatherapy benefits of this versatile spice. Some people have also found cinnamon oil to act as a sexual stimulant. It has also been shown to reduce drowsiness and relieve irritability.

Other great uses for Cinnamon Oil

Due to its anti-fungal nature, cinnamon oil can actually be used as a natural replacement for some food preservatives, helping home cooked meals keep longer in the refrigerator. Researchers also noted that it can enhance the flavor of foods as well as enhancing their shelf life.

Given its antiseptic qualities, cinnamon oil can also be used as a natural green cleaning agent. Cinnamon oil is simple to use and inexpensive to buy, it is also a much less caustic substance to use in home cleaning.

Cinnamon oil is also commonly used as a simple air freshener around the home. When mixed with water and sprayed in the home, it quickly dispels household odors. This also allows for residence to reap the many aromatherapy benefits of this wonderful spice. Oil of Cinnamon can be added to candles or potpourri for the same results. Many real estate agents actually suggest filling your home with popular scents like cinnamon before an open house to help encourage buyers.